I’ve found that if you mention, even think perhaps, the words “Eat, Pray, Love,” somebody in the vicinity will have something to say about it. I remember reading the book when it just got big and totally connecting with the fact that I wanted to learn Italian. I think I may have just barely been in highschool, though, so most everything else I didn’t care so much about. Well, I’ve been on this travel reading kick lately and I knew I had to go back and read it. 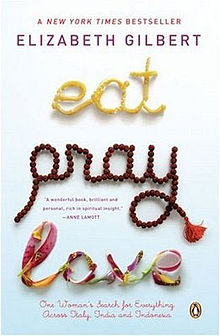 Synopsis from Goodreads: “In her early thirties, Elizabeth Gilbert had everything a modern American woman was supposed to want–husband, country home, successful career–but instead of feeling happy and fulfilled, she felt consumed by panic and confusion. This wise and rapturous book is the story of how she left behind all these outward marks of success, and of what she found in their place. Following a divorce and a crushing depression, Gilbert set out to examine three different aspects of her nature, set against the backdrop of three different cultures: pleasure in Italy, devotion in India, and on the Indonesian island of Bali, a balance between worldly enjoyment and divine transcendence.”

It’s another ’round the world trip, you see, so maybe I wanted to be inspired. The first few chapters, I was not having it. I’ve never been through a divorce, so what do I know about how much you should cry/how much you talk about finances/etc? But I think, just maybe, if that whole chunk was shortened a little bit I would like this book a whole lot more! Approximately half of the section that was supposed to be about Italy was spent crying on the bathroom floor. Let’s throw that in a preface and spend more time with the Italians and the eating, si?

Gianni! An Italian man in the flesh. Well. Pixels.

Skipping ahead to India, because that seems to be the trend, we find ourselves in an ashram. We meet an awesome guy named Richard who calls Liz “Groceries” and helps her find her way to enlightenment. First of all, I wish a had a Richard around, spouting gems of wisdom at every turn. Good deal! Secondly, I know a lot of people who really embrace meditation and have had such success with it. I am not one of those people. I understand the concept of wanting to find that enlightenment, but I just can’t actually wrap my brain around the process. This whole section seems to be about inner demons and that elusive enlightenment to send them away. I don’t want to spoil anything, but she finds it in four months. On a rooftop, nonetheless!

We enter the Bali section when Liz is finding her way to a medicine man’s abode. She met him long ago and he said she would return. He’s wonderful. Then a bit later, she meets another woman who is a healer. Liz then spends most of her time with this woman. This woman is also awesome to read about! She goes to a party and meets the man of her dreams. My goodness. I got to this part and this roller coaster of “Love, Hate, Love” took a nose-dive. OF COURSE she would achieve enlightenment and then find the man of her dreams in Bali. Because on a journey to find yourself, it’s gotta end like a fairy tale, am I right? Yikes.

Does it mean I’ve found myself and achieved bliss, now that we have these shirts?

Negatives aside, what did I like? The characters she meets along the journey are all people that I would like to get to know! Also, visiting Indonesia/Bali is something that I’d really consider. Gilbert does have a way of describing people and scenery and I really enjoyed that. Really, that’s what I was after in the first place. Technically, then, I’ve achieved my reading goal. It’s wonderful that she was able to write a memoir and have (most) people respond so well to it.

I just cannot get out of this three star rut. I hear that she has a follow-up book to this called Committed. I might have to take a breather before I read that one, though! Somebody, please recommend a travel book to me! Maybe one that will give me a four star feeling? 🙂

Have you read/seen Eat, Pray, Love? Which camp do you fall into?

Which of Liz’s destinations would you most like to visit?

My name is Amanda and I'm 22 and on the search for adventure. Travel, running, dancing, reading, and improving my photography skills are my main sources of fun when I'm not in class or at work. I used to blog at Run Principessa, but this is my new jam now! Find out more or stop by and say hello on my About page!